Another year, another award show! The Golden Globes is one of my favorite award shows as far as the celebrity guest list. I love the fashion, presenters and the talent that is always in the room. If you missed it last night, it was probably one of the best awards shows I have watched in awhile.

Amy Shumer and Jennifer Lawrence are probably my favorite duo of 2016…..

Eva Longoria and America Ferrera were hilarious about introducing themselves with their correct titles. Being called other actresses names who look very similar isnt always a bad thing since they are all smoking hott!!! 🙂 Eva’s dress was one of my favs also….

The skits were pretty funny but the acceptance speeches were even better!!!

Tarajj P won Best Actress for Drama series and let everyone know she was going to take her time thanking everyone lol…. She also passed out cookies to everyone on her way to the stage in honor of her name on the show…. Love her! 🙂

I honestly did not see one fashion flaw or dress that I did not like… Everyone was dressed to the nines and looked amazing! I did have my favs for sure….

I am OBSESSED with Kate Winslet at all times!!!! She is flawless no matter what she wears or what she is doing…. I am a HUGE Titanic fan so seeing her just makes me happy! And seeing her with Leonardo makes me even more happy 🙂 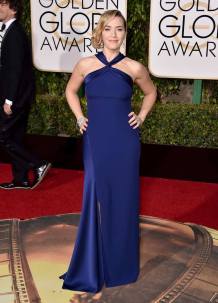 Speaking of Titanic…. my total obsession last night was Leonardo Dicaprio!!!!! I mean, you can not get more perfect than this…

To me, it looked like she was being a little flirty trying to get by and he didn’t know how to react. His acceptance speech for Best Actor made me love him even MORE!!!

What a show….. There were so many more awesome moments but these were my favorites of the night!

What were some of your favorite moments? Who’s dresses did you just obsess over?